The electrostatic tension on the fields of disconnect
An audiovisual performance based on the premises of deep ecology and ecofeminism.

Voltage 2.0 is a collaboration of Berlin-based musician, audiovisual artist and art director Lenka Kocisova,  dancers Marlene Kahl, Canay Sevgim,from collective collapsetofraction and visual artist and educator Jana Francová and dancers and choreographers Markéta Kuttnerová, Magdalena Junkova a Jolana Sturmova, from Czech republic. You are about to listen a soundtrack recorded at the premiere at Berlin’s gallery Vierte Welt in March 2022. In April we repeated performance in gallery NGO DEI in Prague.

Voltage refers to the electric pressure and our piece deals with the ongoing tension between natural and human-created artificial structures, comments on the exchange of the energies. The spectators are guided through the journey of natural pervasive force, which is challenged for its survival within constantly shrinking space, escalating the urgency of our concern.

The creative concept of sound composition Xiao experiments with human voice, the ultimate melodic instrument able to capture instantaneous emotions and thus to translate feelings into sound, and with transcendental Whistling, a Taoist method that creates a connection between whistling and the basic elements of nature, targeting specific body organs through sound and movement. The interpretation of these specific human expressions is further analyzed and reinterpreted in the digital realm by AI algorithms, through deep neural networks. Reworked samples are mixed with the instrumental part, improvisation with electricity currents running throught the semimodular hardware synthesizers Moog Matriarch and Grandmother, the sound explores the possibilities of the human and the artificial, the organic and inorganic, to merge into a new form of coexistence. The soundtrack resonates and revisits internal emotional states, melting the tension stored in old memories and traumas, and brings healing experience through grounding the energy through the dancers movements.

Thier approach to the movement of the physical body is a reinterpretation of the consequences of current events in our environment and events in our society, caused by the uncertainty in the economy and politics, situation right after pandemic, in mids of Ukrainian war. Dancers are interested in the "morbidity" of contemporary postmodernism and how we can connect to the vibrations of the relationship between man and his environment through artistic expression, either as a creator or as a spectator. Movement highlights animality, not as an instinctive behaviour, but as a strength of each of us. The etymological origin of the word animality, derives from the word animal - and that of anima - soul. With movement dancers are looking for the manifestations of our soul, for a relationship with the souls of animals, trees, and also the soul of a place, in the nature or in the city, the soul of a place - genius loci.

Visuals deal with the Anthropocene, the complicated state of society putting sensitive individuals in a state of environmental anxiety. One way to cope with the instability and varying degrees of possibility of responsibility for the state of affairs is to turn attention to a different resolution, to a more subtle perception. The common denominator of all living entities is the cell, as a building unit connected to others in a living mesh. At the cellular level, phenomena take place that have their own structure and whose order creates a parallel logic of things, the background of all that we call life. Cells are the link of all living things and connect all living things together as a system that belongs to plants and animals and creates a different point of view. There is no hierarchy among cellular meshes in the same sense as human society understands it. Similarly, each individual is connected to others, and our common state is our situation, from which no one is excluded or excluded.

The performance Voltage 2.0 embodied also an opening and closing ritual offered by Sarah Martinus, an artist and Core Shamanic Practitioner resident in Berlin.  We wrap the space in recognition, gratitude and respect for the unknown and metaphysical elements of our existential situation. In the opening of the space, the work is made to build power within energetic architectures, encasing the performance within charged compassionate power. The audience is included through being bathed and wrapped with sounds from the shaker. In the closing of the space, the realm is soothed, thanked, we return to the cardinal points once more in recognition and gratitude. We pass the excess energy from the aliveness generated through Voltage 2.0 back into the centre of the earth. 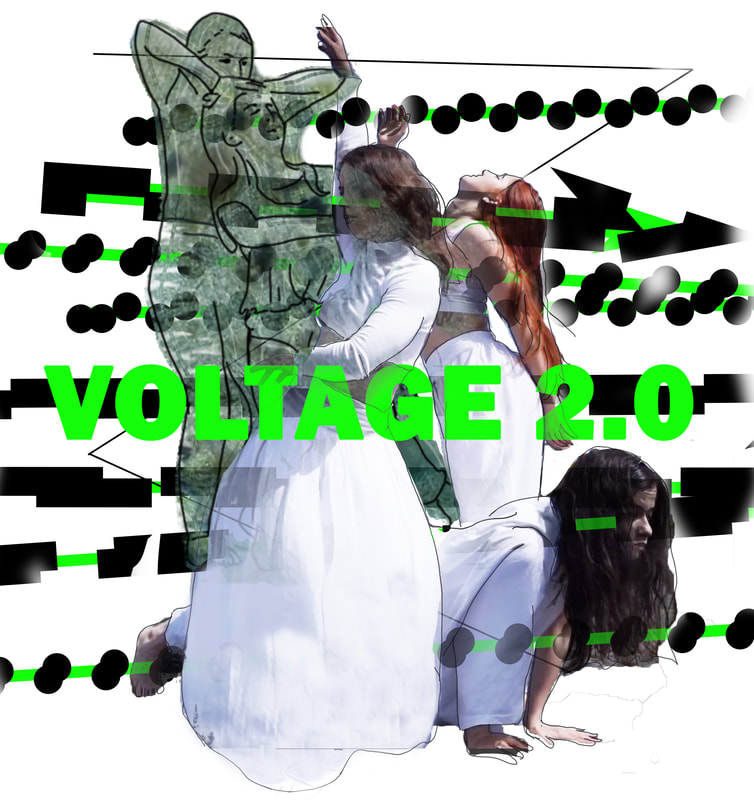 “Liminality can perhaps be described as a fructile chaos. A fertile nothingness, a storehouse of possibilities, not by any means a random assemblage but a striving after new forms and structure, a gestation process, a fetation of modes appropriate to anticipating post-liminal existence” Victor Turner

Adaptation of Akkamiau’s recently released InTerjeCtions EP (Detroit Underground) into a liminal performance. At “work in progress” showcase four-channels sound is accompanied by 3D visuals created by Jakub Krejci, sourcing in the original b&w animation by Anastasiia Holumbovska. This obscure audiovisual content meets with movement performance by four female dancers from CollapsetoFraction collective, under the choreography by Calvin Bernauer.

Performers will interact also with the audience, will work with their perception of the space and movement within. We will evoke emotions and create connections. Interjections deal with internal issues such as trauma or stress induced disorders in the beneficial and healing way through various forms of vibrations. 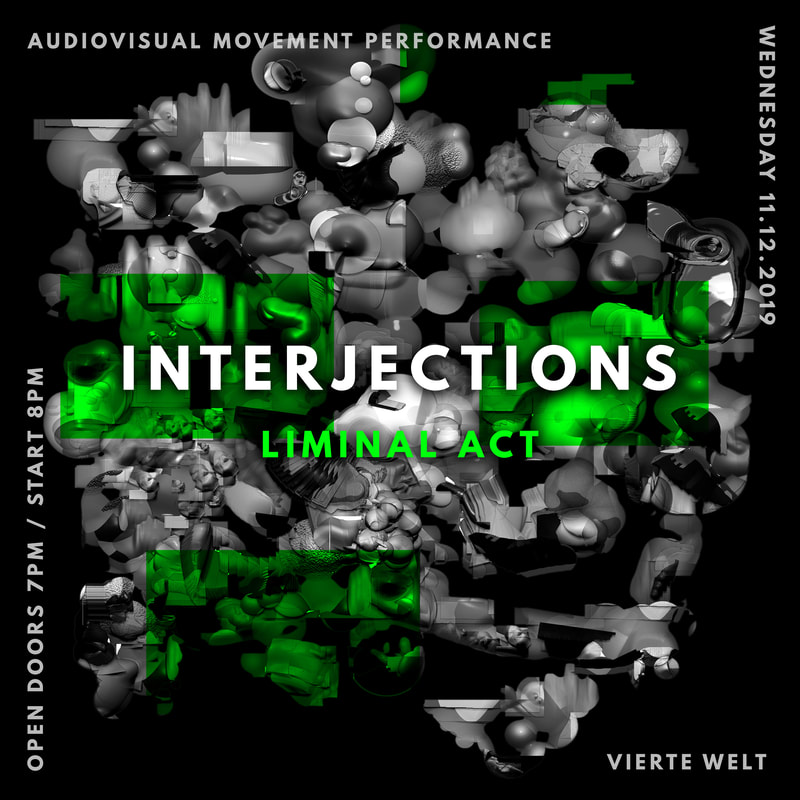 All audio elements source from reading of the poem by StratoFyzika members, each with different language background and accent. In interpretation of the text the music concentrate on psycho linguistics (phonetics and phonology), on intonation and the melody of language. The recordings translate yet another expressive layer revealed in the final composition, by converting the recordings through their prosodic features, such as pitch, rhythm and dynamics in Mangle granulator.