Artists statement
​
Before moving to Berlin, my experiments and discoveries took various art forms such as photography, videos, mixed media installations or performances, and as a final PhD project I directed an audiovisual play based on an autobiographical story, fulfilling an inner vision of Gesamtkunstwerk. As a soundtrack, I used my own “lo-fi chilly lolly pop” songs, electronic music and noise tracks produced by my friends and fellow musicians who participated in an “original” version of the story.
It was at that time I realized that sound environment plays a very important role in my life, and that I really enjoy filling up space around me with vibrations, either by my extrovert presence or by playing music and sounds for others. Living in Berlin I crossed the event horizon of Jungian self-actualization. For many reasons, it felt like coming home, back to my roots — the emerging techno scene of the 90s. I proudly call myself an old school raver and before my art studies I used to be a DJ and organized many parties and events.

So here and now, after 20 years long loop, you find me at the intersection. What is my creative approach?  Fully focused on music production. Akkamiau, experimental emotional agent, heavy-mental, composing a soundtrack for life, purring feline empress. Hithertoo, reasonable compromise, fixed our massive energy spills on the grid and builds a stable haven for our family quirkiness. By conjunction of these two, we enter a healing process. What we demand is connection, energy fusion in one common vibe, so I found myself behind the decks again, under the flag of techno nation. I am interested in rituals, in "thick" events, in multisensorial phenomenon of music, in aural, tactile, spatial, physical and vibrational sensations. And just recently voice and lyrics returned into my soundscapes, trying to deconstruct the language, while the message remains in granulated sound… and beyond the language, I like to observe animals auditory communication patterns and play with them, in order to decode its emotional core and destil an essence; a primal language, The Music.
for Heroines of Sound
8.3.2019, Berlin

hiT͟Hərˈto͞o statement:
Embodiment, in a sense of embodied cognition, and from a philosophical perspective, is about merging imaginary separation between body and mind; in between an instant stream of emotions and a logical reasoning. It is a life task of each of us, a constant feedback processing. The mind is embedded in the body, as the body is embedded in the environment of this planet. We all are channeling each other. Universal extended mind is all around us, materializing in its visible bodies. Fluctuations on a Planck scale and billions of years had to pass to arrange our micro world to the constellations of matter, which gives a rise to the consciousness of our biological type, emerging again from our tiny, but complex brains and sensory-motor system of a body, feeding from the origin of matter and energy; at these times of immersion, interactivity, telepresence, virtuality and artificial life we learn how to create "the others". It is our task to discovered fully our own psyche, before we give a birth the the new AI child.
Games of god. How and why to animate silicon dust. Or else how to fall in love with a machine.
Intuition conference Brno / 2015
http://www.artmap.cz/konference-intuiceintuition-conference 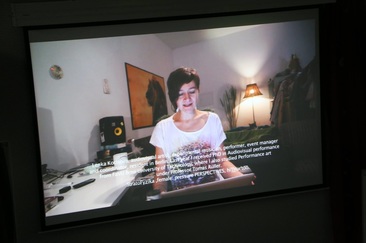 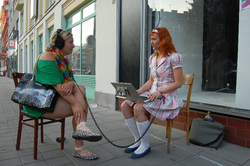